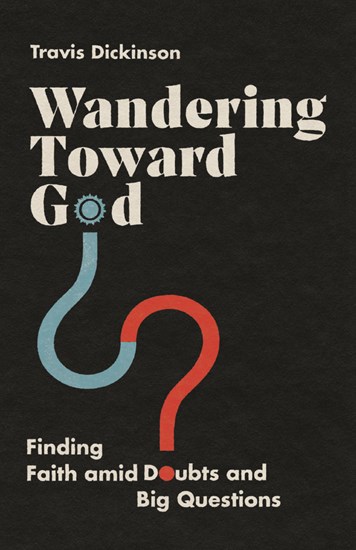 In some circles, deconstruction is an unforgivable sin, marking one as an apostate or a leper. In other circles, to deconstruct has become a badge of honor—a rite of passage. Entering this conversation is Travis Dickinson, author of Wandering Toward God: Finding Faith amid Doubts and Big Questions (IVP, 2022).

To Dickinson, doubt is not inherently sinful; on the contrary, to doubt can be a sign of growth. In his own words, “doubts are a normal part of the Christian experience, and there is value in leaning into our doubts as we wander toward God” (p. 28). At the same time, doubt arises as a result of a fallen world and so should never be romanticized. “That is why the celebration of doubt and deconstruction popular among some Christians is wrongheaded. If we think Christianity to be true, there’s no reason necessarily to be happy about a serious case of doubt” (pp. 28-29).

Dickinson is clear that we have a problem in evangelicalism in that doubt is generally stigmatized. People no longer bear their burdens in community but instead become closeted doubters, finding refuge in an impersonal podcast or private Facebook group where there seems to be acceptance.

Of course many of us simply don’t know what to do with people who are open about their doubts. It would seem that our evangelical churches prefer happy-clappy Christians to those with serious questions. Or could it be that people with doubts are simply too taxing and draining on our souls?

I am becoming increasingly convinced that a good majority of Christians (raised in evangelical homes) who are now deconstructing are doing so simply because they have suppressed their questions and doubts. The fault, I would argue, lies mainly with how our churches don’t know what to do with people with real questions.

But what if we could find ways to listen to doubts in a healthy way? What if our doubt and our faith are not sworn enemies?

To Dickinson, if we misunderstand faith we will inevitably misunderstand doubt. If we think of faith simply as certainty, we’ve missed the mark. Faith is multifaceted and layered, though society and the Church alike seem to dumb it down, talking of “blind faith” or “a leap of faith.” In my view, Christians ought to use language like “a leap of faith” very cautiously as it suggests an abandonment of reason that seems foreign to the New Testament. For anyone interested in better understanding what the New Testament actually teaches about faith, I suggest checking out Nijay Gupta’s Paul & the Language of Faith.

Giants of the Faith Struggled with Doubt

Closeted doubters are everywhere in the Church. A zealous pastor telling his congregants to stop doubting just may have a doubting wife, daughter, or son. The American Church’s response to doubt can be judgmental, vague or over-simplistic, with quick-fix remedies like “read your Bible” and “pray more.” The American Church needs to read more books like Wandering Toward God, books which give space to the reader to have genuine doubts without shame or judgment. If doubt were a sign of weakness, then the heroes of the Christian faith were weak men and women. Dickinson writes, “Sadly, many abandon their Christian faith because they cannot find a safe place to admit and talk about their doubts” (pp. 4-5).

“Sadly, many abandon their Christian faith because they cannot find a safe place to admit and talk about their doubts.”

Ultimately, it’s ok (even normal!) to be a Christian and have some questions unanswered. Christianity isn’t about having each and every question answered. Some questions we’ll sift through for years before even coming close to an answer. And some will be answered only when the current fog is lifted in the new heavens/earth.

John the Baptist had doubts on his deathbed, and Paul himself seemed ok with uncertainty and mystery, though he would certainly reject how far many Progressive Christians have taken this. At the risk of generalizing, Protestants seem to have an unhealthy aversion to mystery, gravitating toward the mirage of certainty. Too many embrace the idol of absolute certainty, an idol which (in Dickinson’s words) is “a house of cards.” We need more books going against the grain of triumphalism, and yet we need more books that also care about orthodoxy and truth. In this regard, I applaud Travis Dickinson.

“Faith, when understood properly, can tolerate big questions and significant doubts. Faith, when understood as requiring certainty, can’t tolerate any question or doubt whatsoever. We should have questions, and many of us are going to doubt along the way. There is no biblical expectation that we have absolute certainty. In fact, the Bible characterizes our knowledge as limited.” [From p. 47 of Wandering Toward God.]

After Doubt: How To Question Your Faith Without Losing It (A.J. Swoboda)

How (Not) to Read the Bible: Making Sense of the Anti-women, Anti-science, Pro-violence, Pro-slavery, and Other Crazy-Sounding Parts of Scripture (Dan Kimball)

Reading While Black: African American Interpretation as an Exercise in Hope (Essau McCauley)

One thought on “Is Doubt Sinful?”