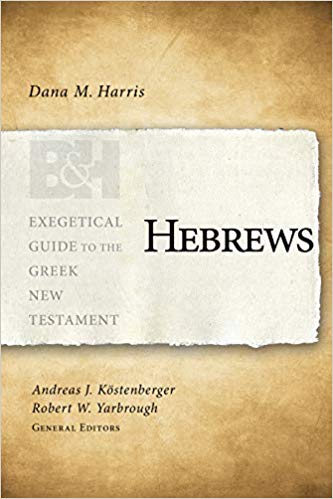 This is now the second commentary I own in this series and I must say that I am far from disappointed. At the end of given sections the author provides homiletical suggestions which, in my opinion, are golden in and of themselves. The recommended resources at the end of sections are also gems.

The author of Hebrews is most undoubtedly a second generation believer, well-educated and a male “based on the personal pronoun used in Heb 11:32”, and also likely a Hellenistic Jew. The author of this epistle clearly knows his way around the Old Testament, proving to be a master exegete and a “creative theologian, a gifted preacher, and a devoted pastor who cared deeply for his flock.” The recipients of this letter may have also been of a Hellenistic Jewish background.

Hebrews is a long and complicated letter. Some find it a bit dry or strange (or too long!), or not enough like Paul’s thirteen surviving epistles. We need more resources such as the one produced by Dana Harris, full of great insight as well as rooted in the world and text of Scripture. Harris proves to be a superb exegete in her cautious and even-handed approach as well as in her knowledge of the ins and outs of ancient Greek.

Proving to be to the point as well as in depth, this is a practical and superb resource for scholar and pastor alike, though intended for those who have at least somewhat of a grasp on ancient Greek. Another thing to note is that abbreviations are used left and right. If the reader is not used to this, they may feel a bit lost when reading, and the flow of thought may be interrupted when the reader has to refer often to the abbreviations page. I have grown a bit more accustomed to this due to the phenomenal commentary by Joe Hellerman on Philippians (also in this series).

Dana Harris has produced a superb commentary for pastors and laypeople alike, though for one to reap the benefits, it would be best for the reader to have at least dipped their toes in biblical Greek.

One thought on “Dana Harris on Hebrews”