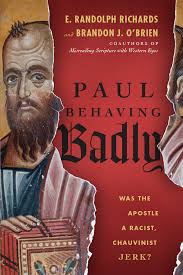 Drawn in by the title as well as some of the endorsements, I am currently finishing up the November release by IVP titled Paul Behaving Badly: Was The Apostle A Racist, Chauvinist Jerk? It’s refreshing to discover a new book written by academic authors that is not dense, (you won’t need to keep a dictionary close by for this one!). A delicate handling of individuals texts is definitely a trademark throughout the reading as the authors (E. Randolph Richards and Brandon J. O’Brien) pay very close attention to detail in their examination of Paul’s letters. Though proving to be basic, Paul Behaving Badly is definitely not ‘dumbed down’ in its content.

An undertone in the book is the importance of context. “If you want to understand someone’s motives and the significance of their of their beliefs or actions, you have to consider them in light of the age and culture in which they acted” write the authors (p. 18, Introduction). We cannot overstate that Paul was a man of his time and not a “twenty-first-century American” (p. 19, Introduction).

I found Paul Behaving Badly to be very refreshing in many ways, one of them being that the authors don’t try to give easy answers to a complex topic, leaving room for ambiguity as well as room for the reader to come to his or her own conclusions. There is no shoving of an agenda down the reader’s throat, something that is a problem in both “liberal” and “conservative” Christian literature.

WHO IS THIS BOOK FOR?

Anyone who tends to avoid Paul’s letters, preferring perhaps Jesus (or the Psalms?), should pick up a copy. For those also who have made up their minds about Paul as a sexist or homophobe, this book may (or may not) prove to challenge such common assumptions.

I would also recommend this to anyone interested in NT studies and yet doesn’t want to delve into the heavy academic reading right away. This book bridges the gap pleasantly between the academy and the lay person.

*I received an electronic copy of this book for an honest assessment from NetGalley.