Should we “do away” with Doctrine? Brian McLaren’s new release (book review) 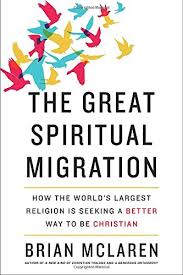 Speaker and former pastor Brian McLaren has given us a book which will prove provocative to many Christians. In The Great Spiritual Migration (Convergent, 2016) McLaren utilizes superb communicative skills throughout all 205 pages (228 counting the three Appendixes), speaking into the dissatisfaction among “Catholics, Evangelicals, mainline Protestants, and Orthodox Christians…that there must be a better way to be Christian” (p. 3-4, Introduction). While I agree that such a dissatisfaction is evident and needs addressing, McLaren has some interesting “solutions.”

Get rid of doctrine

This is a sentiment throughout all of the book. Although I very much was intrigued by the opening pages of the book (I’ve never encountered a book by this author), it became very apparent that McLaren is not a fan of doctrine but actually seems nauseated by it. Doctrine, according to him, needs to be replaced by love, by inclusivity, by living like Jesus. McLaren is of course reacting to the serious problem in Christianity in which believers are more consumed and concerned with believing the right things than they are living the right way. But why cannot right living and right believing coexist? Are they really incompatible? The New Testament (NT) seems to hold both in balance. If some Christians highly stress doctrine and neglect right living, should we really throw the baby out with the bath water?

Besides flirting with universalism (p. 91-92), McLaren pushes for Christians to wander from what he perceives as close-mindedness and into the realm of anything is possible here as he hints often that there may be no absolute truth (see especially p. 211 where he equates an openness to absolutely anything with an openness to the Holy Spirit (as well as makes more implicit here his stance that there is no absolute truth)).

I happen to be a big advocate for maintaining mystery in our relationship with God as it has nurtured my awe and wonder of him. I don’t, however, throw a staple of Christianity (=Scripture and doctrines extracted from it) out the window. An open mind is never a bad thing. But once you wander into relativism, it is not too speculative to say you’ll never return. McLaren shares stories of his personal faith journey and of how he has almost left the faith. In reading the book I honestly did wonder if he in fact hasn’t already left the faith and replaced it with relative ambiguity.

Use your experience as the lens through which you read Scripture

I’ve never used the phrase “a low view of Scripture.” It’s a phrase that many fundamentalists may use when they disagree with you. Nevertheless these words are what my brain came up with when writing this review. McLaren implies greatly that our culture (as well as our emotions and experience) act (or rather should act) as a lens through which we read Scripture rather than Scripture being a lens through which we view culture (and our experience). Spiritual Migration disregards the importance of the Bible left and right, a confusing thing to ponder since historically this book has been a great anchor of our faith.

Throughout the book the idea is put forth of moving on from what we know (doctrinally) and moving into the unknown and mysterious. I am very much an advocate of maintaining mystery in the Christian faith; but I cannot enter the relative oblivion that McLaren holds on tightly throughout the pages in Spiritual Migration in which there may not really be any truth, only love.

At the start of ch. 2 he uses an analogy of the changes made in science, stating that just as there new discoveries which change how we view science, so we need to let our beliefs undergo change and evolve. To what end are we to evolve or adapt? McLaren doesn’t say. I’m all for being subversive, something that is sadly not always happening in the church’s interaction with culture because of the dichotomy between the “sacred” and the “secular.” But what McLaren calls for throughout his new release is not just an evolution which calls Christians to be subversive; but rather McLaren seems to call Christians to give up on Christianity (historical Christianity) and yet still call it ‘Christianity’! (This really is mind-boggling to me.) A call for Christians to give up on doctrine/trust in Scripture and just love people.

McLaren will use Scripture at times to prove points but then will contradict himself by making statements which downplay Scripture and doctrine.  He constantly pits love and doctrine against one another all the while quoting from the likes of Jesus and Paul. What McLaren needs to realize is that Jesus and Paul are both Jews and therefore doctrine is a given, as the Jews historically held very tightly to their “doctrines”; that there is one God, that the Law is from God, that it is a light to Israel’s feet, etc. Paul and Jesus were not products of America in the 70’s and the “make love not war” era; there were Jews (from Israel) 2,000 years ago.

One section, noting many terrible things done in the name of God (by apparent Christians) implies that because much in the past was terrible, we cannot trust the past exegesis of church history. Once again this is an example where the author throws the baby out with the bathwater. Many of the terrible things noted in his book (conquests, slavery, etc.) of course arose from different factors, one of them being a mistreatment and abuse of Scripture; a projecting of cultural norms onto Scripture to make Scripture align with our own twisted (or fallen) agenda. This happened in America when “Christians” used Scripture to justify slavery (=a cultural norm) and what McLaren does throughout Spiritual Migration to justify his modern agenda full of modern cultural norms (of inclusiveness, universalism, relativism).

*(When I refer to “inclusiveness” I mean by it the support of gay marriage.)

Ultimately McLaren’s new release scoffs at the idea that both love and values can be held in high and equal esteem, utterly rejecting such a notion.

In closing, I am happy to have read this book as I have been interested in what Brian McLaren has to say (as I hear him quoted often among my progressive brothers and sisters in Christ). This book does seem to indicate that he has given up on the church as we have known it for 2,000 years. That said, I am grateful to have a voice which stresses the importance of social action/justice and calls for us to reexamine not just what we believe but why we believe it.

(I received my copy from Blogging For Books in exchange for an honest assessment.)