Scot McKnight, The Modern State of Pastoring, and The Apostle Paul 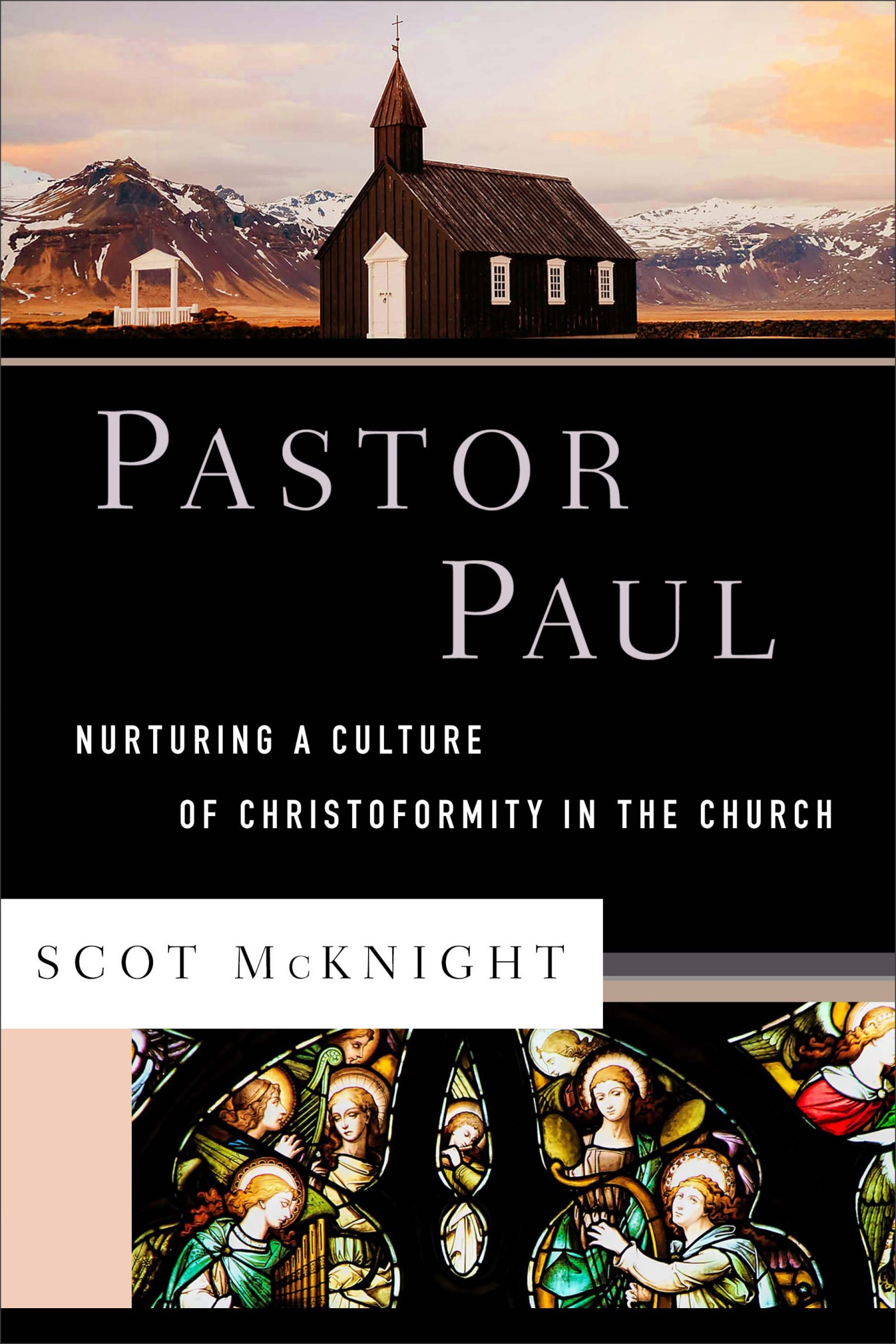 What makes a pastor a pastor? What is the New Testament vision for the pastorate vis-à-vis modern conceptions? New Testament scholar and prolific author Scot McKnight attempts to answer such questions and more in his latest release, Pastor Paul: Cultivating a Culture of Cruciformity in the Church.

First, McKnight takes us on a journey of what we many times allow the role of pastor to become; we often unwittingly reduce the pastor to being little more than a performer.

I recently watched a video of one of America’s most well-known pastors talk about how many hours he spends per week preparing his sermon–it was a lot. The rather long clip spent time getting into what good or great pastors do, and proceeded to make pastoring out to be studying of Scripture, and then giving a sermon based on that study. Now is that all wrong? Isn’t that what pastors do?

McKnight writes, “Some people who want to pastor think pastoring is about preaching sermons and studying all week…” (p. 2). The role of pastoring to McKnight is to cultivate and nurture “Christoformity” (conformity to Christ). While this certainly involves preaching, it is never to be limited to preaching.

One can be the greatest, most gifted, and charismatic orator, and yet a pastor is “not a pastor if he or she is not pastoring people during the week” (p. 3).

Ivory tower pastors have become far too prevalent. This type of “pastoring” appeals to our individualism, perhaps especially in America, but goes against pastoring as modeled by the apostle. Paul generally knew those he proclaimed God’s word to, and seemed to enjoy their company. Relationality is key in pastoring, but is many times overshadowed by the apparent meat and potatoes that is preaching and teaching. Performance is often overemphasized while relationality is reduced to a mere footnote.

Similar to the pastor as performer is the danger and prevalence of the celebrity pastor.

“Mastering the proper gesture, knowing where the camera is…, knowing the right color to wear, focusing on the most emotive story rather than the Word of God—these are all at work in the celebrity pastor who understands Sunday mornings as a performance. That’s not pastoring, and it is decidedly non-Christoformity” (p. 28).

A pastor’s primary role is to cultivate conformity to Christ among his congregants. To do this, pastors must cultivate “A Culture of Listening” (p. 16). A culture of listening requires the pastor to feed his or her own soul with God’s Word before ever expecting the congregants to do so. Pastors must know well to listen to the text of Scripture before expecting those in the pew to do the same.

McKnight likes to test pastors by asking them: “Do you read or study the Bible only for the sermon?” Pastors must develop sensitivity both to God (throughout the week) and sensitivity to the congregation’s needs.

“…the Sunday morning big-show personality preacher is not a pastor if he or she is not pastoring people during the week” (p. 3).

Some Dangers and the Darkness of Pastoring

Much strain is placed on pastors who are expected to serve their congregations despite “intense personal anguish—their own struggles in marriage, the anxious nights of concern over their children, divorces in the family and in the parish, physical suffering and disease” (p. 15).

Add to that the fact that pastors many times avoid friendships altogether, for some reason or another thinking that the need for friendship and vulnerability does not apply to them.

“…pastors today, perhaps more than at any time in history, need to become part of a network of fellow pastors. Many pastors burn out, and at least some of them could have been prevented had they been a part of a network” (pp. 32-33).

“Pastors…need more margins in their schedules, because friendship only thrives in the margins of our life. Friendship…only finds itself in leisure time, and Americans are some of the worst at leisure in the world” (p. 33).

A much more sinister darkness is brought up by McKnight when he notes many Christian leaders who “work…hard at nurturing [their] image and reputation” and do so at all costs, even going to great lengths to destroy their critics. When doing so, they may claim that it is for God’s glory, though they (at this point) have deluded themselves. Ego-drunk, self-deluded Christian leaders who scoff at accountability have become far too common.

“I’ve watched one pastor after another become a celebrity. In so becoming, he worked hard at nurturing his image and reputation and brand and, when his status was in jeopardy, he sought to destroy his critics” (p. 28).

Many in the broad celebrity-as-pastor category seem severely misguided (and driven) by self-preservation.

Next the author borrows from Sondra Wheeler who strikingly writes, “Most pastors who lose their way do so because they lose themselves, in a sense, and grasp at anything (approval, admiration, celebrity, inflated authority, money, sex, or the unhealthy dependency on those they lead) to fill the void they experience” (p. 27).

Noting the constant temptation of success, McKnight puts it well when he writes, “The pastor as celebrity…is the world at work in the pastor’s heart and congregation’s soul” (27).

“…everything in ministry needs to point to Christ and not to leaders. The personality cult of Corinth was very much like our pastor-as-celebrity culture, but Paul will have none of it: “So let no one boast about human leaders”” (p. 167).

It is important to note that pastor celebrities are not simply common in specific denominations, but they seem to, in fact, transcend them. The Reformed crowd, sometimes big on witch-hunting the more “crazy” or outlandish celebrity pastors, have produced celebrity pastors of their own. Some of this is inevitable in a hyper-Internet age. But some of this is a product of Christians being worldly and carnal, prone to prizing power while scoffing at apparent weakness. Eugene Peterson got it right when he wrote, “Church leaders frequently warn against the drugs and the sex, but at least in America, almost never against the crowds.” This is indeed a phenomenon and temptation that transcends mere denominational boundaries.

Back to The Basics

McKnight takes some pressure off pastors when noting that spending twenty hours per week on sermon prep is not central to pastoring. Central to being a pastor is maintaining devotion to God. While it sounds elementary, pastors need to constantly be reminded of the shepherding and care-taking of their own souls.

Pointing out that the same term used in Genesis 2:24 (Adam cleaved to Eve) is used also to describe our relationship to God, the author writes, “…the pastor’s responsibility is to cling to the Lord in love, adoration, worship, obedience, and faithfulness” (p. 12). What comes before pastoral performance? Even before sermon preparation? The pastor’s love for and devotion to God. This often is the very thing sacrificed on the altar of “performance.”

Clinging to God is not the first thing one thinks of when they think of pastoring. Pastoring is far too often reduced to great oration, or skills at organizing public events. It is interesting to note that by Paul’s own admonition he was a weak orator. While oration and delivery were certainly important to Paul, they were almost certainly not the holy grail of pastoring.

“Too often pastoring is fashioned today by business leaders…” (p. 12)

Many have grown tired of the pastor that preaches well but doesn’t know anyone’s name in his congregation. This book is not another book written with mega-church pastors in mind, or a book full of business principles that is masquerading as a book on ministry. McKnight has produced a book written to the pastor in the trenches.

Full of wit, wisdom, and clarity, Pastor Paul exposes the many ways in which pastoring today seems to have no biblical leg to stand on. With a commitment to Scripture as well as a rugged commitment to Christ-centeredness, this book stands as a warning to the American church and her tendency to prize power and fame, and is a call to recover the New Testament vision of pastoring. Written in a very readable fashion and not without some humor, everyone considering ministry should pick up a copy.

Rooted in realism as well as in the world of the New Testament, this is the best resource on pastoring that I have encountered, and one of the best books on Paul the apostle, beautifully capturing Paul’s vision and legacy for what it means to pastor.

3 thoughts on “Scot McKnight, The Modern State of Pastoring, and The Apostle Paul”